Warlords of Draenor is here!

Life has bee busy and I haven't gotten around to a full update, yet. I've been playing and forcusing on getting to 100, and taking screen shots along the way. I promise, an update is coming, but I'll just leave my speculation up a little longer...

This coming expansions is a lot harder to predict new animals for than the last since Mists of Pandaria clearly had a Chinese or at least East Asian theme. The chances of seeing cranes and re-skinned tigers and new dragons was pretty high. The expansion correlated to an actual geographic region in our world, so it would stand to reason that they would reference at least some of the  animals already walking around there. I was quite pleased with the animals added in MoP, the water striders, the cranes and so many new smaller mammals really helped flesh out the world (otters, porcupines, tanuki) it really made me smile.

Now, with Draenor (Outlands) as the only preexisting reference, it's a bit harder to make any guesses. They've shown us some concept art of re-skinned boars, eleks, talbuks, clefthoofs and other animals we've already seen in Outlands, so we know they are updating the models. Here's a bit of what's been datamined already:
It looks like if it had horns, those are now larger and rougher and overall everything is "meaner" more "menacing", just my first reaction. As for the Talbuks - That updated body shape (musculature, slope of the back, and oh my gods that tail!)  is MUCH more horse like than antelope (which the original Talbuks were based off of.) Not gonna lie, that tan pic of the Talbuk kind of reminds me of a My Little Pony (not that that's a bad thing, just an observation.)
Chimeras are getting an update and it's been pointed out (and I wish I had come up with it) that this design is a little Kaiju influenced (from Pacific Rim) and I can kind of see it. If that's true, that is COMPLETELY AWESOME AND I APPLAUD BLIZZARD FOR PAYING A HOMAGE TO AN AMAZING MOVIE! 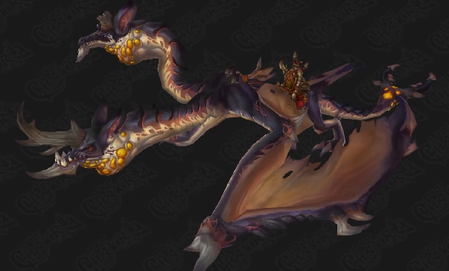 OK, Here's some of the animals that are completely new to Azeroth. Riverbeasts (hippos), Dragonflies, and Axebeaks (Toucans ). I'll update here as more information becomes available. I won't add any of these to their corresponding animal pages until well into Beta and possibly not until I'm able to play and get my own screenshots. (None of these are my images.)

For more and up to date information check out the Petopia Forums!
I don't even know what to say here, Yes please? Dragonflies are natural hunters, so I'm totally down with these guys as  hunter pets ...sadly it looks like these guys have been merged into the wasp family and their design made more wasp-like. One day though, one day we will get Dragonflies.
MORE AWESOME NEWS!!! - The following groups of animals already in game will become tamable!!! Finally, more hoofstock are getting some Hunter love! These guys are more than capable of helping hunters take down their prey.
Clefthoofs and Talbuks and Stags and Gazelles oh my! This is just completely awesome and I am so excited to tame some of these and then send them into battle. Thank you Blizzard!

Here are some new looks, pretty cool. And look at that raptor there, beautiful lines and just an awesome up-skin. Here are some more new skins you'll see in WoD.

As to anything else? It's really all up in the air. We could get some new very cool fungal life forms, or more open savannah or rolling hills animals, but really anything is possible here. We haven't seen many marsupials, but I'm not thinking this will be when a kangaroo or wallaby based animal will show up. If we are going with meaner or tougher animals, let's see some geese or swans, or maybe some llamas. We haven't seen meerkats yet, they might show up.  Maybe storks, we don't have any of those (and if the Skettis show up again, they are kind of stork like (maybe more vulture-like, but we already have those.)  So, here some animals we have yet to see in game, maybe we will soon...
In continuing to think of more aggressive animals or at least "meaner" for lack of a better word, because I don't want to represent that these guys are bastards quite like swans, but Cape Buffalo (Syncerus caffer) are one of the more, let's say, respected in terms of people and animals giving them space and not messing with them. They will take on lions if they go after their calves or other members of their herds, and they are half-ton wild African bovines and I think would make a good addition to this new Draenor. We really don't have any non-domesticated bovines in game.