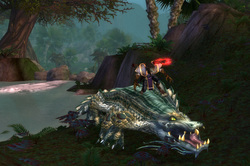 There are about 8,000 species of Reptiles and they all share these characteristics:

1. Breathe Air
2. cold blooded -exothermic-(though not actually cold, they need heat to live and function; they just have to get it from their environment instead of producing it themselves. An interesting note: because reptiles don't have to expend the energy needed to make their own heat, they have to eat cnosiderably less food to keep their bodies going.  Birds and mammals have to pretty much eat every day, some reptiles can go days, weeks, even months between meals.
3. Have scales (which are made of keratin, same stuff in our hair and fingernails, and bird feathers, fish scales...hey...this stuff is everywhere! Go Keratin! It's your birthday!)
4. Lay Eggs which are covered with shells (though some snakes do have ovoviviparous birth - eggs form and hatch while still in the body, then the little snakes slither out of momma.)

There are 6,000 species of Amphibians and they all share these characteristics:

1. ectothermic (body temperature is dependent on environment; they still need heat to help digest their food and to run their body, they just have to get it from the Sun in some way. So, no frogs in Antarctica.)
2. Skin is smooth, moist (and needing continual moisture) and glandular (there's a reason lickin' toads is a bad idea and it ain't warts.)
3. Breathe Air - though most, at some point, have gills as tadpoles and get their oxygen from the water.

As with a lot of the animals in WOW, species are differentiated mostly by color variation as opposed to differences in shape and structure. 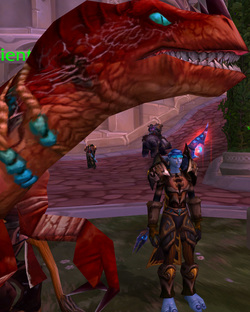