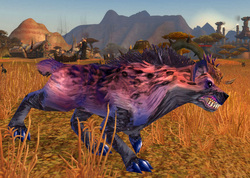 There are only 4 species of Hyena and they are in their own distinct Family, separate from both cats and the dogs. They have a strong matriarchal social structure with a female at the lead. They are mostly meat eaters but will eat fruits on occasion.  Of the meat that they do eat, a large portion is carrion.  So these guys help explain how the Barrens stay carcass free after we've returned to the crossroads with quests completed.  The hyena model in-game is based off the Spotted Hyena (Crocuta crocuta - also known as the laughing hyena.)  Hyenas range through most of Africa and the middle east, into India. 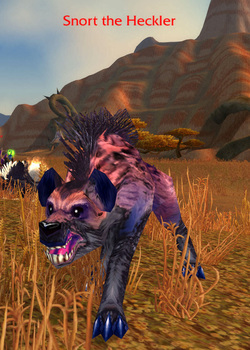 Snort the Heckler was my first rare spawn tame (at lvl 17!) and I still have her (renamed Helwynd.) I adore the Hyena vocalizations. The ones in game are a wonderful representation of the sounds actually made by hyenas.  It is such a unique sound, I'll even send her after things just to hear the vocals.

She is one of my favorite pets and it makes me happy when the other buffs are covered and I can bring her out for raids.  Hyenas in general are very fascinating and while I have not had the chance to work with them yet, they are one of the animals on my list. I kind of think their talent should be "bone-crusher" since their uber powerful jaws are strong enough that they will eat the bones of an animal along with the meat.