Unidentifiable!
These are guys where I just can't seem to find a better place to put them.
I'll happily take suggestions. 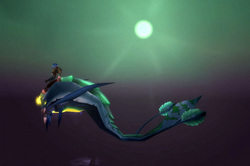 Their skin seems fairly smooth and I want to call reptilian.  I would at least venture to say that they are cold blooded. They appear to have chitinous bony plates on their back. They have two side tails that have fins, probably for better maneuverability when flying.

As to flight itself? Their "wings" do not have the aerodynamic coverage to produce enough lift on their own, and so act more like fins to help maneuver when already moving. And aside from just saying it's magic and walking away, I'd like to think it is some kind of lighter-than-air gas production - made in the glowing sack on their underside. They have a wicked set of teeth, that implies that they are carnivores, or the plant material they are eating is tough and needs to be sheered or torn off. And with names like "marshfang ripper" that doesn't sound all cute and cuddly herbivore to me. 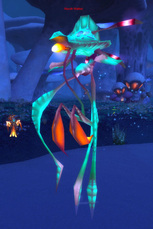 These seem to be a biological version of the War of the Worlds antagonists. Their skin seems reptilian or amphibian. They have a bioluminescence.  They appear to have a mouth on the underside of the bright light eye in front. They have multiple appendages and so maybe are an invertebrate?