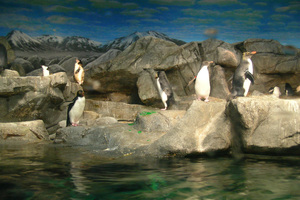 Penguins are a group of aquatic, flightless birds living almost exclusively in the southern hemisphere, especially in Antarctica. Highly adapted for life in the water, penguins have counter-shaded dark and white plumage, and their wings have become flippers. Most penguins feed on krill, fish, squid, and other forms of sea life caught while swimming underwater. They spend about half of their lives on land and half in the oceans. Depending on which scientist you talk to, there are between 17-20 species of penguins. The largest species is the Emperor Penguin (Aptenodytes forsteri) and the smallest is the blue penguin (Eudyptula minor).

The penguins in game are an excellent representation for their wild counterparts. These little guys are kind of like Rockhoppers (Eudyptes chrysocome) and the larger ones appear to be skinny necked versions of Emperor penguins.