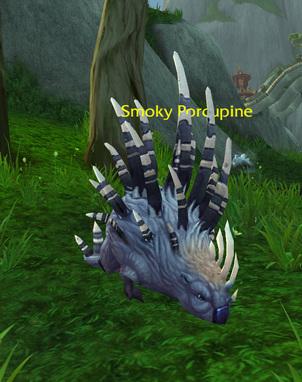 I'm just gonna say I called this one.  Me, and me alone, no one else ever had this idea and I can only assume Blizzard got the idea from my website and not that they had it in development for years. You are welcome. (Let it be known I claim the same thing about otters.)

Ok, so technically these guy are rodents and should be on the squirrels, rats, and mice tab, but I wanted to put all of the new, smaller mammals together just for ease of updating. (Give me a minute and I'll say the same thing about beavers.) Because of their membership in the rodent family they are generally herbivores and have large incisors for front teeth.

There are 29 species of Porcupines, generally divided between the Americas and African/Asian body types. And it is the striping on the quills of the ones in game that make me think they are more based off of the African varieties than the American ones.

The ones I worked with didn’t have a ton of personality and tended to be a bit stand-off-ish.  They were interesting, though, and when they got angry they would stamp their foot and rattle their quills as a warning.  I’m thinking we should have giant, ride-able porcupines in-game.
My Pre-MoP Prediction: Rogues have their Fan of Knives; well we could have an Explosion of Quills.  Not that real world porcupines can fire their quills, but some species' quills have barbs on the end (think mini-harpoon) that cause them to stick rather painfully in the skin.  The  African Crested Porcupine's quills don't have barbs, they do get rather dirty and so a nasty infection is common after getting stuck with one.  That would be more of a bleed effect, I guess. But the Explosion of Quills would make a nice AOE ability.

Original thoughts - Otters would either be a lot of fun to animate or a nightmare.  I am not a programmer, so I'm guessing it might be more of the latter.  Like ferrets, these guys seem to have no spine or any bones in their body.  They kind of bounce/hop along as their on-land movement and are fluid playful grace in the water.

Actual Game play -I'll admit to being a little disappointed in these guys in the way that they move. It's not bad, but otters have such a unique way of moving that it's gotta be hard to mimic.

There are 13 species of otter and I was fortunate to work with the largest of them - Giant River Otters - Pternonura brasiliensis (as seen above, weighed 60lbs!) I loved taking care of them. They were adorkable clowns that could also chew your face off.  Otters in general tend to have a bit a reputation for ill-temperament.

I think the ones in game are more modeled after the Small Clawed River Otter (Amblonyx cinereus) - seen below. 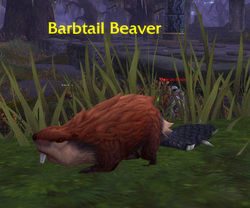 They are the 2nd largest rodent and there are only two species. the North American Beaver (Castor canadensis) and the Eurasian Beaver(Castor fiber) .  They are closely related to squirrels and are herbivores, naturally.

The in-game beavers look pretty similar to their real life counterparts save for the spikes in the tail. Otherwise, a true translation.  I haven't seen any dam building (save for an ability when pet battling), though, so appearance is similar, but the basic behavior is not quite there. Not that is has to be, just citing differences. 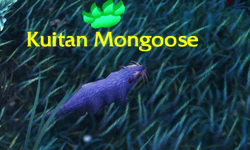 There are 33 species of mongoose, all from either Africa of Asia. Meerkats (Suricata suricatta) are in the mongoose family and I had a blast working with them. They are colony animals and are surprisingly vocal. They were always making little trills, grunts and chirps. They also had a warning bark that sent every member of the colony running for their burrows. Now, other actual mongoose  can live in smaller family groups or even be solitary. Mongoose are carnivores and will eat pretty much anything they can catch, be it terrestrial, aquatic or flying.

I haven't seen any mongoose interact with snakes in game, but some real life species can hunt venomous snakes. 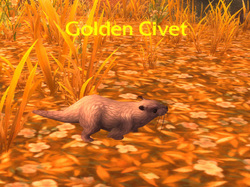 So they obviously used the same model for the otters, the mongoose and the civets. While the animals are not whole dissimilar (they are at least all carnivores.) they do have slightly different body builds and I think this one falls farthest from matching the real counterpart. I do give props for recognizing civets though. They are a mostly nocturnal mammal native to tropical Asia and Africa, especially the tropical forests.

Fun fact and potential hunter pet attack and or quest collection ingredient- The civet produces a musk highly valued as a fragrance and stabilizing agent for perfume.

The first raccoon I met, Gizmo of course. What a great little addition to the game. And then Socks. I'm not sure if you get to see these guys on the Horde side, but I hope you do. Raccoons can be rather endearing...on the flip side they can definitely carry rabies. Raccoons are common throughout North America from Canada to Panama. These guys can adapt to urban environments, so we could totally see them in Stormwind or Orgrimmar. I think the in-game ones are a great representation of the real life Raccoons.
Warning - spoilers in video below. 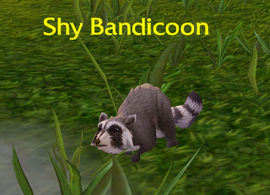 They obviously used the Raccoon model for the  bandicoons. But since they sort of combined the name of Banticoot (real life animal) and raccoon, I guess that's okay. Bandicoots are a group of about 11 species of small to medium-sized, terrestrial marsupial omnivores. Did you see that? Ladies and gentlemen, we have our first Marsupial in game! Well, a creature based off of one. These shy little creatures are native to Australia and generally more active at night. Small in size, and aside from coloration, they are not that different from the in-game bandicoons.

Same model used for the bandicoon.
Ok, so I hadn't actually heard of these guys as real species until someone emailed me about them not being on this site (thank you for letting me know!). Turns out they are better known as a Japanese raccoon dog (Nyctereutes procyonoides viverrinus) They play a significant part in Japanese folklore and are reputed to be mischievous and jolly, a master of disguise and shapeshifting. While they may look similar to badgers and racoons, they are actually in the Canidae Family (dogs). 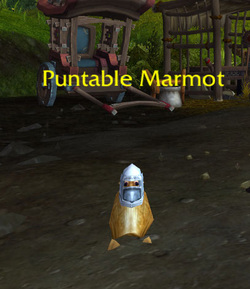 Apparently Blizzard does not like Marmots. You can stomp on them and punt them. They also like to dress up as chickens - "A Marmot Disguised in Chicken Feathers! Expose him for the sham he really is!" Don't worry Old Hillpaw, I got ya covered.  I'm thinking someone in Blizzard had a bad experience with marmots.

They are about 15 species of this large land squirrel, and groundhogs are sometimes considered marmots.  They tend to live in mountainous areas and are found in North America as well as Europe and Asia. These guys typically live in borrows and in large social structures. And again, the game plays homage to this when you have to fill in marmot holes in the quest Rampaging Rodents - "I went off this morning to watch my papa fight the virmen. When I came back, the farm was full of marmots!; I don't want to kill them, but we need to get rid of them. Hey, I know! We can close the holes!; Fill in their holes with dirt, so they can't come out in our farm anymore." And this is the quest where you get the Puntable Marmot.  - thus another example of how disliked these guys are.


Looking at appearance, I'd say they are spot on (even if it is a sized up prairie dog model already in-game - they're all related - so the look works.)

Fun fact - In 2010 Alaska passed a bill that made February 2 Marmot Day.

So, my deductive reasoning tells me that no one in Blizzard is from Alaska, or they would obviously love marmots, as I'm assuming all Alaskans do.