There are 6,000 species of Amphibians and they all share these characteristics:

1. ectothermic (body temperature is dependent on environment; they still need heat to help digest their food and to run their body, they just have to get it from the Sun in some way. So, no frogs in Antarctica.)
2. Skin is smooth, moist (and needing continual moisture) and glandular (there's a reason lickin' toads is a bad idea and it ain't warts.)
3. Breathe Air - though most, at some point, have gills as tadpoles and get their oxygen from the water.

Frogs come in all colors. Poison dart frogs especially have very brightly colored skin as a warning that they are poisonous. Blizzard could put literally any color on the frog and it would probably be close to something found in nature. Frogs are awesome. 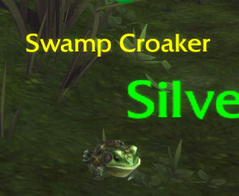 Path 5.2 brought us the Isle of Thunder and so a new frog skin - a Swamp Croaker.  These guys look very much like Bullfrogs (Rana catesbeiana) and are the first new change in frog profile shape to show up in WoW.
So far frogs are the only amphibians in game. There aren't any salamanders or newts. Apparently Macbeth's witches would be SOL.  But it does leave room for growth and a giant salamander would be an awesome mount.