These guys are in the mammalian order Xenarthra along with anteaters and sloths (two animals not currently in WoW.)  These are New World mammals, found only in the Americas. They eat insects and while relatively small now, there used to be Giant Armadillos who weighed 220 lbs and who's 10ft carapace was used as roofs by early South American Indians.

random fact: armadillos can carry leprosy, so if they are ever made into hunter's pets (and if moths can be hunter's pets then I think that opens it up for just about any animal) their special ability can be Leprosy, which would obviously be a DOT/bleed effect, or maybe a disarm, literally. 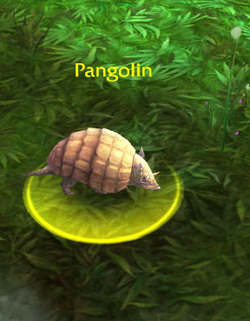 I'm gonna add Pangolins to this page since they used the same skin for both animals. I was thrilled to see the name Pangolin used and that they included those animals in the game.

There are 8 species and all of them have large keratin scales covering their skin.  It is found naturally in tropical regions throughout Africa and Asia. The name, pangolin, comes from the Malay word, pengguling, meaning "something that rolls up".  And that is their defense mechanism, they roll into a ball, much like the armadillo. They are insect eaters, having a long tongue like an anteater.  Someday, I'd like to meet one.