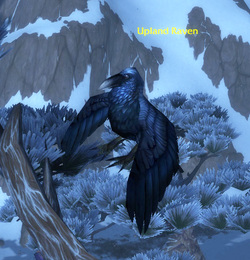 Crows and Ravens are one of the most intelligent of the bird species and rank high on the intelligence scale overall, being just shy of dolphins, apes and elephants. They are one of my favorite animals and have a wealth of history and mythology surrounding them. I was definitely pleased to be able to get one as a Hunter Pet (I haven't named it yet, but it's going to be a Poe reference, naturally.)

Demoralizing Screech is a pretty decent ability. The call of a crow is so distinctive and resonates with you when you hear it. 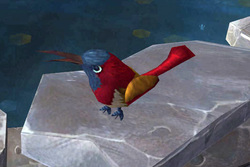 These little guys can be found perched on windowsills and the side of pools in the forested and grassland areas of Pandaria. You can't interact with them and they do not have names, but they are little jewels with personality. I am going to say Bee-eaters, Flycatchers or Rollers, but more broadly Passerines - a large group of birds that make up about 1/2 of all bird species and include songbirds and perching birds. There are over 5,000 different species in all shapes and colors. More specifically Rollers or Flycatchers seem to be a good match. The in-game birds have beaks that would be ideal for catching insects.